Broom, brush or broomstick dancing, whatever it is called, was in the past common right across Cambridgeshire and the Fens.

One of Enid Porter’s main informants about fenland customs, practices and traditions was Arthur Randell, who grew up in the “marshland” area between King’s Lynn and Wisbech.  He lived, when young, in Magdalen, where his father was the local mole catcher.  This was, of course, an extremely important occupation as mole tunnels could undermine the river and dyke banks, leading to flooding.  Arthur’s father had the very vital bank of the Great Ouse, from Lynn to Downham Market to protect.

Enid encouraged Arthur to write several books and acted as his editor.

In his first, “Fenland Memories”, published by Routledge and Kegan Paul in 1969, he describes the harvest and its celebrations in some detail:

The speeches ended, Fiddler Brown and an accordion player named Loggins would then strike up a tune and everyone would march round the tables singing
‘Hayman, Strawman, Raggedy-Arse, Maliserman,’ and this would start the entertainment part of the evening.  Plenty of comic songs were sung, plenty of beer was drunk and there was dancing too, one man at least being sure to do a Broomstick Dance by holding a besom in front of him and moving forwards, at each step putting first one leg then the other over the broom.  This needed some doing, especially if the dancer had a good lot of beer in him, if he was not to trip and fall flat on his face. 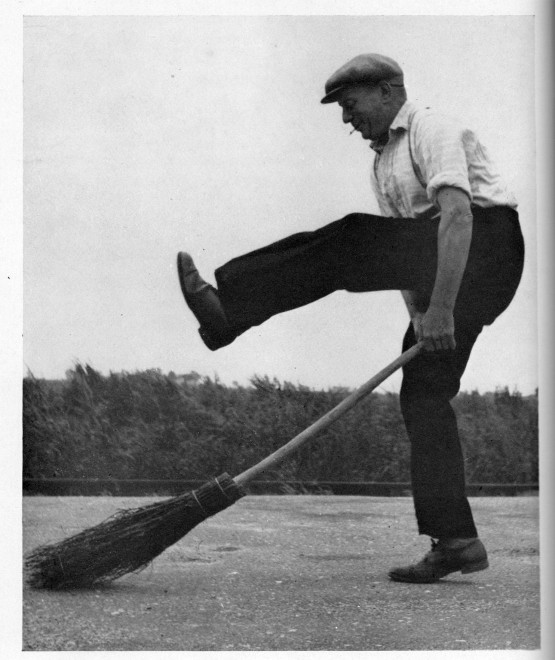 From “Sixty Years A Fenman” by Arthur Randell, Edited by Enid Porter

The dance wasn’t restricted to harvest time, however, or to the northern fens.  Sybil Marshall depicts it as a common form of competition over on her side of the fen in Huntingdonshire at the beginning of the twentieth century.  Broom dancing was also observed being performed by molly dancers on Plough Monday in Little Downham in the 1930s.

I first saw the dance performed by two Travellers at a wedding in Wisbech in about 1980 and the following year Cyril Papworth performed the dance at a molly dance workshop in Cambridge.  Cyril’s grandmother had taught him the molly dances from Comberton in South Cambridgeshire, and his dance became known as the Comberton Broom Dance, although it probably contained similar figures to that danced in different parts of the county.  It is an amalgam of these figures that we teach the children, and we’ve taught thousands and got through countless brooms, brushes or broomsticks.