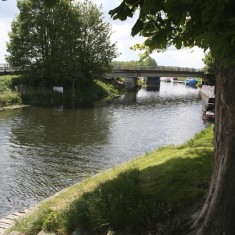 The Little Ouse where the prisoners were hanged 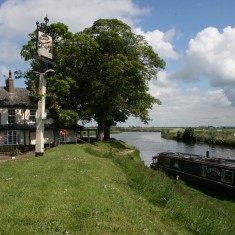 Prisoners Of War Were Forced To Dig The Drains

In the 1650s Cromwell finally burned all his bridges with the people that he had grown up with and, like Charles 1st, decided that a way of making loads of money was to drain the fenland and thus produce the most valuable farmland in Europe. The local people would not help and, of course, did all they could to undermine the work, sneaking out in the night to damage the newly dug dykes etc. The work was mastermind by Cornelius Vermuyden from Holland, but much of the backbreaking labour was carried out by prisoners of war.

Murder At The Ship Inn

Some of the prisoners of war came as a result of Cromwell’s ethnic cleansing enterprises in Ireland. One prisoner was named Johnny O’Hara, a member of a traveller family from Southern Ireland. One night he and an associate escaped and spent several days on the loose. One night, hungry and desperate, they reached a pub which stands on a promontory of land where the Little and Great Ouse meet. This pub was run by a Dutch couple. O’Hara and his friend murdered the landlord and landlady and made off across the fen with as much money as they could find and all the provisions they could carry.

Execution In “The Dutch Manner”

Eventually they were caught, probably on Porter land, near to Southery. Punishment in those days was both swift and bizarre. If you killed someone from another country you were killed in the manner of that country. They were brought back to the inn, The Ship at Brandon Creek, and executed in the Dutch manner. This entailed placing them on a barge in the river, which was tidal at that time. There they were put at high tide, a beam was placed across the river and nooses hung from it round their necks. As they tide went out they were slowly hung. It is said that the beam was then cast into the river and for many years was a nuisance to boats that kept snagging on it. It was eventually removed and used when the inn was expanded. So there it probably still is, holding up a ceiling.

A Black Sheet With A White Noose

Other members of the O’Hara family were held in the same prisoner of war camp and eventually, when the work had been completed, they were set free. They remained in Britain as travellers well into this century. The family symbol on the back of their trailer was a white noose on a black background, to remind them of the lurid events surrounding the death of their ancestor. Every time they passed the Ship at Brandon Creek it is said that they placed a black sheet on the hedge in reminder of Johnny.