You are here: Home > Cambridgeshire traditions > Witches and Witchcraft > Breaking a Spell 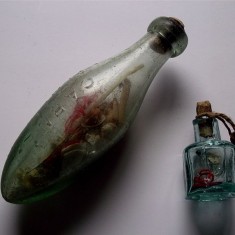 Bottles to protect against a witch’s curse 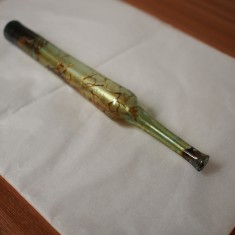 A bottle for breaking a witch’s spell

The spells of Cambridgeshire witches were generally thought to be rendered harmless if a bottle containing hair and nail clippings and urine were burned secretly in the fire at midnight. Often the ritual caused suffering to the witch or brought her round to the door. In the latter case it was usually the custom to refuse to speak to her, as this made her powerless to leave and forced her to spend several hours in the open. Once a word was said to her she was free to go.

In 1936 the following method of breaking a spell was recorded from the man who, as related in Witchcraft near Wisbech, had been bewitched by old Mrs Reeve from Lake’s End near Wisbech.

Take a stone bottle, make water in it, fill it with your own toe nails and finger nails, iron nails or anything that belongs to you. Hang the bottle over the fire and keep stirring it. You mustn’t speak or make a noise. The old witch’ll come to your door and make a lot of noise and beg you to open the door and let her in. If you don’t take no notice but keep quiet the old witch’ll burst, but if you speak to her she’ll be free.