The Riots as Recorded in Enid Porter's Notebooks 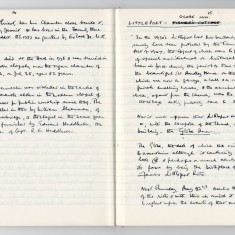 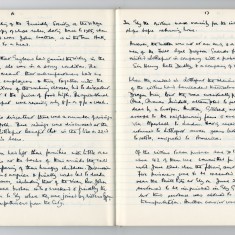 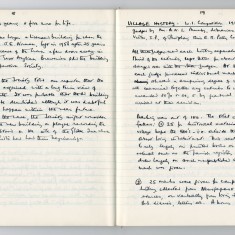 “In the 1930’s Littleport lost two buildings which would surely have been preserved by the Town and Country Planning Act of 1947, the object of which was to preserve buildings of special architectural or historical interest had it been in force during the period of their demolition. They were the beautiful old Audley House on the site & gardens of which are now a garage, a hall & a number of shops & private dwelling houses, & the ancient Fisher’s Cottage which, apart from the church, was the oldest building in the village dating probably back to the 15th century.Now it would appear that Littleport may be losing another &, with the exception of the church, its most historic building – the Globe Inn

The Globe, the date of which the xxxx has been xxxx to ascertain although it certainly dates back to the late 18C & perhaps a much earlier period – earned its fame by being the birthplace of the famous – or infamous Littleport Riots.

Next Thursday, May 22nd marks the 142nd anniversary of the riots & with this in mind it is perhaps worth while to reflect upon the events of that momentous occasion.

It was at a meeting of the Friendly Society, or the village Benefit Club, a copy of whose rules dating back to 1785, when the Globe’s landlord was John Wattson, is in the Town Hall, that things came to a head.

As a result of the discontent there were a number of risings in Norfolk & Suffolk. These risings were discussed at the meeting of the Littleport Benefits Club.in the Globe on 22nd May over the men’s beers.

Many of the men had left their families with little or no food, & perhaps at the backs of their minds they could hear the whimpering of their hungry children. Discussions became angrier and angrier & finally words led to deeds. The shops & homes, including that of the vicar, Rev. John Vachell M.A., were broken into and wrecked & finally the mob moved on to Ely where they were joined by rioters from Downham and sympathisers from the City.

In Ely the rioters made mainly for the inns, breweries and bakers’ shops before returning home.

However, the matter was not at an end & a company of sixteen men of the First Royal Dragoon Guards from Bury St Edmunds visited Littleport in company with a xxxxxx of the cathedral, Sir Henry Bate Dudley, & a company of volunteer militia.

When they arrived in Littleport the soldiers found that they majority of the rioters had barricaded themselves in the George & Dragon Inn. But they were eventually persuaded to surrender. One, Thomas Sindall, attempted to get away, but was shot dead by a xxxxx. Another, Gotobed, managed to make his escape to the neighbouring fens & eventually got transport via Apeshall to London. Having received a pardon he returned to Littleport seven years later but, being unable to settle, emigrated to America.

Of the rioters taken xxxx some 70 to 80 were taken to Ely where 42 of them were committed to trial. The trials lasted until June 22nd. when the following sentences were passed. Five xxxx were to be executed & this was done near the Mill Pits at Ely on June 28th. Eleven were sentenced to be imprisoned in Ely Gaol 12 months but this sentence was altered to one of 7(?) years transportation. Another convict was sentenced to transportation for 14 years, & five more for life.

The secretary of the Society told our reporter that the Globe had been acquired with a long term view of developing its site. It was probable that the old building would have to be demolished although it was doubtful that this would happen in the near future. Should this be the case the Society might consider placing on the new building a plaque recording the fact that it stood on the site of the Globe Inn where the Littleport Riots had their beginnings.”