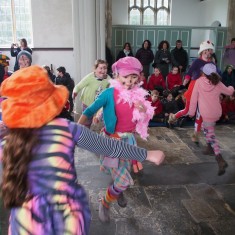 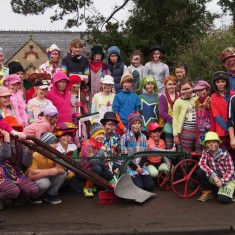 The procession leaves the church to return to school

The ancient celebration of Plough Monday was brought back to life in Swaffham Prior on Wednesday 15th January 2014. It was last practiced in the village in the late 1920s and was revived in the twenty first century as part of the Enid Porter’s Folk project. Plough Monday is traditionally the first Monday after twelfth night but busy timetables meant it was shifted back a bit in 2014!

The celebrations saw children from the local primary school proceed through the streets of Swaffham Prior following a small plough. They were dressed in brightly coloured clothing with blackened faces and sang the original song:

A sifting of chaff and a bottle of hay,
See the poor colts go wagging away
Squeak, boy, squeak and wag your tail.
Hi ninnany, norny!

The procession took them along the High Street where a photograph was taken to comemmorate the occasion (in the very same spot as the photograph taken of Ploughboys in 1929). The parade then continued up to St Cyriac’s church where the plough was blessed for the forthcoming agricultural year. Then the children performed some jolly molly dances, much to the delight of the friends and parents who had come to watch.

The procession was much fun and a resounding success so perhaps it will become an annual occurence like the Plough Monday festivities of many years ago.

Comments about this page