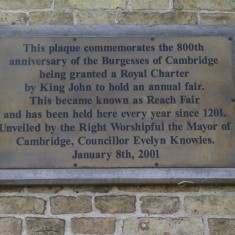 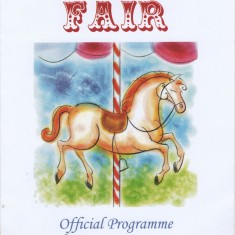 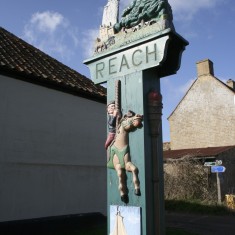 Reach Fair has been held in the village since 1201 and still draws large numbers to witness the traditional opening of the Fair by the Mayor of Cambridge who flings handfuls of new pennies into the crowd to be gathered by the local children. Enid Porter recorded that the fair had been existence long before 1200. Reach was an important place as it was a port, at the end of Reach Lode which connected the village to The River Cam and River Great Ouse. Sea-going vessels were able to navigate up to Reach until around 1650. Reach Fair got so large that in 1862 the festivities were so extensive that a complimentary Fair, “a Bustle” was held in Upware. Enid Porter describes how the police from Swaffham Prior and Wicken had to intervene to break up the “free-fighting”, pitching one group into the Lode and the other into the Fen Drain. Enid interviewed an eye-witness “Shoals of people were everywhere about and the heat was intense; the dancing booths were crammed full, pugilism was in the air, fighting was going on in all directions…..there was a bable of noise from harp and violins, the blowing of horns and concertina playing. After each dance there was a rattle of heels as was customary with the villagers. The whole pandemonium was punctuated by the noise of the skittle alley, a pastime much in vogue then”.

No such trouble was observed at Reach in 2014. As tradition dictates, children from Year 6 at Swaffham Prior Primary School opened the Fair with a series of maypole dances to live music provided by Nicky Stockman, Andrew Noyes and a band of folk musicians drawn from across the country. Children from across key stage 2 took the opportunity to show off many of their new skills gained under the Enid Porter Project to the thousands attending the fair. They performed a whole range of molly dances alongside the Ouse Washes Molly Dancers and one child was drawn into a broom dance competition with 3 of the “Ouse Washes” dancers. Local people showed much interest and those present were continually bombarded with questions about the traditions and associated stories.