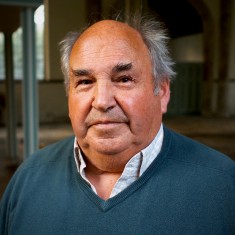 Peggy and Cyril Cooper as children on Rogers Road, Swaffham Prior, in the late 1930′s 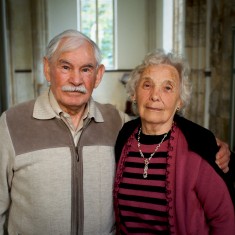 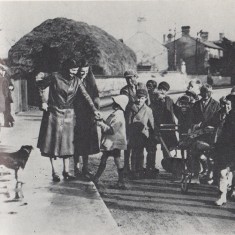 Plough Monday in Swaffham Prior 1929 as collected by Enid Porter

The Enid Porter project put more names to faces, identifying children who went out on Plough Monday in the past. The publication ‘Cambridgeshire Customs & Folklore’ by Enid Porter contains an image of children with their plough on Plough Monday in 1929. The project held a community celebration in St Cyriac’s Church in Swaffham Prior on Wednesday April 30th, 2014. When Gordon asked if anyone from the village remembered Plough Monday in the past, Cyril Cooper’s hand shot up. Cyril, his brother George and their sister had travelled over especially for the event, picking their sister up from Birmingham so that she could attend! Cyril remembered Plough Monday as a child and had clear recollections of singing the ‘Sifting of Chaff’ song whilst touring the village with a plough. They were keen to inform us that their uncle, William Ambrose, was the boy in the far right of the picture in Enid’s book. They confirmed that the date 1929 was “about right” according to William’s age. Other local people have confirmed that this picture was taken outside the village hall (next to the school) and remembered playing in the haystacks pictured when they were children.

The Cooper family also kindly brought along albums of historical photos and stories to share with those present.