The last load of corn ( the Horkey Load) from the fields was carried in great ceremony on a decorated cart bearing the harvesters accompanied by the Lord of the Harvest ( the supervisor and spokesman for the reapers) and his Queen, sometimes a man dressed as a woman, or more recently a pretty girl adorned with a wreath of corn and flowers, carrying a great bunch of ribbon-tied, flower-decked wheat. The reapers would shout  ”Horkey home! Now water!”

The villagers would line the road and throw buckets of water over the cart. This may have been in earlier times imitative magic to encourage rain to fall on the seed for the next harvest.

Pig in a Gutter 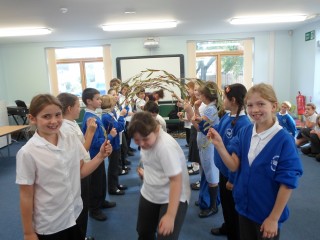 Pig in a Gutter was played on Shrove Tuesday on the Camping Close, a large public playing-field situated behind the Old School but is now largely built over. The children spend many early spring days removing the prickles from bramble branches so that they could use them to form the tunnels through which the children would run as they cried

The game could go on for a very long time and would use the whole perimeter of the field. When we played the game in school we did not use bramble branches, but found that weeping willow was a much safer substitute although not anywhere near as spectacular.

The game was written down by Cecil Sharp after his visit to Littleport Girls’ School in 1911. The original manuscript is in Clare College Library but can be seen here on the Full English website.

The game is described under its alternative title Old Roger is Dead in Alice B. Gomme’s  book The Traditional Games of England Scotland and Ireland. ( Vol 11, P16 ).

The planting of trees or flowers on the graves of friends  was once a common practice and it was thought that the soul of the departed went into the plant. The game shows the belief that spirit of the deceased enters the tree and resents the robbery of the fruit by the old woman. The game is a survival of an old method of acting old plays with a “chorus”- the ring of children- and the actors who say nothing but act out their parts in mime.

Pupils in Year 5 at William Westley CE Primary School learnt about Harvest customs and old playground games with Mary Humphreys. The games were popular in Victorian and Edwardian times but many have been forgotten over the years. Enid Porter described a number of games, such as Pig in a Gutter which are no longer played, but which when re-introduced into the school proved very popular with the pupils.