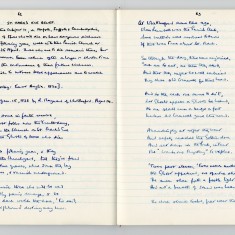 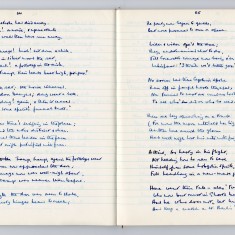 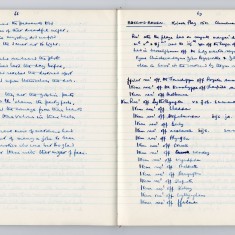 “The belief on this subject is, in Norfolk, Suffolk and Cambridgeshire, that the apparitions of those who will die or have dangerous sickness in the course of the following year, walk into the Parish church at midnight on 25th April. Those who are to die remain there, but those who are to recover return after a longer or shorter time in proportion to the continuance of their future sickness. Those who wish to witness these appearances are to watch in the porch”.

The legend some in faith receive,
Though most folks now the truth deny,
That from the Church on St. Mark’s Eve
Issue the ghosts of those who die.

Within the following year, & they
Ramble the Churchyard till they’ve found
Their future graves, where down they lay
Themselves, and vanish underground.

And likewise those who will be wed
In ghostly pairs emerge, and so
Such as dare watch the door, ‘tis said,
Their neighbours’ destiny may know.

At Whittlesford some time ago,
When Rumbell was the Parish Clerk
Some worthies were resolved to know
If this was true about St. Mark.

So through the day, true? vows enjoined,
Each one to act as then they said
And that they might be well combined?
They chose old Cromwell for their head.

And so they each one swore to do it
Let ghosts appear or ghosts be heard
No one should run or budge a foot
Unless old Cromwell gave the word.

Accordingly at night they went
And safely reached the gothic door
And sat down in the porch, intent
The “wondrous mystery” to explore.

‘Twas past eleven, ‘twas nearly midnight
No ghost appeared, no spectre stirred?
The moon shone forth a feeble light
And not a breath of sound was heard.

The clock struck twelve, pat went their hearts
Till the last stroke had died away
When hark! A noise, and up one starts
Who fain would then have run away.

Hush, courage!(?), hush! Sit down a while.
And those? in silent mood they sat,
When, hark! a footstep in the aisle.
Tramp-tramp, their hearts beat high, pir-per!

Silent they sat; the noise increased.
A pew-door banged, dong went a bell.
Dong! dong! Again, and then it ceased
“It was some spirit’s funeral knell.”

Hark! now there’s singing in the place;
They heard the notes distinct and clear.
They stared there leaden in the face
And sat nigh petrified with fear.

Tramp, tramp again the footsteps went
And nearer now approached the door;
Their courage now was well-nigh spent
Each tramp was nearer than before.

At length the door was seen to shake,
Its lusty hinges heard to creek;
The party now began to quake
But none presumed to run or speak

Wider and wider ope’d the door;
They, undetermined what to do
Till Cromwell’s courage now being o’er,
Whispered: “I think we’d better go.”

No sooner had their Captain spoke
Than off in fearful haste they sped
Now turned to cast one curious look
To see who‘d die or who be wed.

Then one lay sprawling on a tomb
(For now the moon withheld her light)
Another here amid the gloom
Had well nigh lost his wits with fright.

A third, too hasty in his flight.
Nor heeding how he ran to save
Himself from some hobgoblin sprite,
Fell headlong in a new-made grave.

Home went their tale – alas ‘twas true,
Who now but must in ghosts believe?
And he who does now, let him go
And keep a watch on St. Mark’s Eve.

Two days, xxxx the peasants told
The adventures of their dreadful night;
The third? the mystery did unfold
And bought the secret out to light.

Some wags who overheard the plot
Which they had laid the day before,
‘Ere they had reached the destined spot
Had closed upon themselves the door.

And there they act the goblin parts
That caused the alarm the party feels
That chased the courage from their hearts
And put their valour in their heels.