The Mayor reads the Riot Act in Wisbech 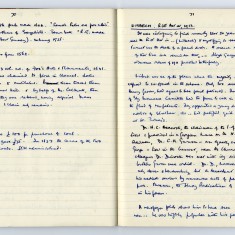 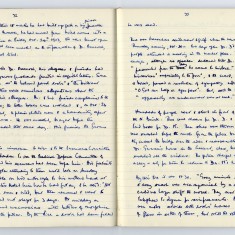 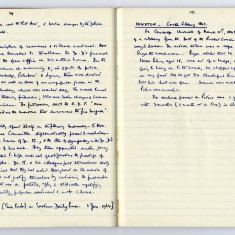 It was intriguing to find recently that 50 years ago the Mayor of Wisbech read the Riot Act in… (Wisbech) & mystifying to see that the occasion of the tumult(?) was the death of a xxxx doctor. A search of the files of the E.D.P. of that time is a reminder that.. Lloyd George’s original national insurance scheme of 1911 provoked bitterfeeling.

Dr H.C. Meacock, the Chairman of the I. of Ely branch of the B.M.A. lived & practised in a Georgian house on the N. Brink. The Vice-Chairman, Dr C.H. Gunson – an equally convinced opponent of L. George – lived in the Crescent, near the church. By them & their colleagues, Dr Dimock was met with icy disapproval. Only the brothers Groom were cordial. Dr, D., however, turned out to be not only clever & hardworking, but a xxxx man who supplemented his medical services by numerous acts of personal kindness to the poor. Moreover, the xxxx Radicalism of the Fens enlisted itself in his xxxx.

A newspaper photo shows him to have been a handsome young man.. he was highly popular with his patients in Wisbech & neighbouring villages, & within 18 months he had built up quite a big xxxx practice in addition to his xxxx. Moreover, he had moved from hired rooms in to a house on the Crescent… Then on Friday Oct 24th 1913, the news burst upon Wisbech for Dr. D. had been arrested on the information of Dr Meacock, on a charge of criminal libel.

It seems that for months Dr. Meacock, his colleagues and friends had been receiving anonymous postcards printed in capital letters. Some of them spoke of Dr. D. as “the beloved xxxx doctor” & “the brilliant young surgeon”, but made scurrilous allegations about the conduct or Dr. M, and his colleagues. M. & his friends complained to the Police & the Post Office; the letter boxes were watched &, on Oct 24th the Police superintendent, 2 plain clothes men and a handwriting expert when to Dr. D’s house. He was arrested, brought before the magistrates & remanded that same day. His friends the Grooms stood bail for him.

Dimock asserted his innocence to them & to the Insurance Committee & next day went to London to see the Medical Defence Committee of the B.M.A.; but found his accusers have been before him. His patients stood by him & after attending to them until late on Sunday evening; he rode home on his motorcycle to his mother’s house at Stretham. His sisters asked him how he had got on, and he said “Not at all”. He broke down and cried, but then recovered & went to bed, saying he had not slept for 3 days. At midday on Monday he was found unconscious with bottles of morphine & vexxx under the pillow. By the time a doctor had been fetched he was dead.

Hundreds of people went & stood in front of Dr. Meacock’s house on the N. Brink. There were cheers for Dr.D. and the brothers Groom, & loud boos for Dr. M. Then stones were thrown _ _ several windows were smashed before the rush from the police broke the crowd up. But they crossed the bridge over the river & reassembled again in front of Dr. Gunson’s house in the Crescent, where booing & hooting, they smashed all the windows. The police charged again & drove them away – only for them to return to Dr. M.’s house.

It was then that the Mayor read the Riot Act, & xxxx charges by the police at last cleared the streets.

The next day the queer mixture of reverence and violence continued. 200(?) mourners from Wisbech travelled to Stretham to Dr. D.’s funeral and filed in pairs passed the open coffin in his mother’s house. In the town, blinds were drawn in mourning &, in spite of police reinforcements from Cambridge, Peterborough & Lynn three(?) more doctor’s windows were smashed as well as those of an unpopular grocer(?) in the High Street. On Saturday, which was market day, the crowd turned to fighting the police & throwing fireworks; there were barn charges and beams were broken instead of windows. The xxxxx, said R.C.D.P. ‘were very powerful – as loud as the xxx that summoned the fire brigade’